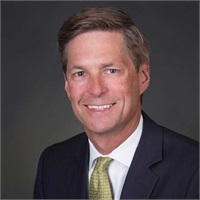 As the Managing Principal of Hunken Ewing Financial Group, Mr. Scott B. Hunken shares responsibility for firm-wide management with Mr. Van A. Ewing II and is member to the Executive Leadership team.   Scott holds the primary leadership position in the firm for their brokerage business, operations, underwriting and policy services, and marketing. Additionally, he acts as a consultant and mentor to all members of the firm.

With 29 years of experience, Scott is a recognized leader in the insurance and financial services industry. He has qualified for Guardian’s Leaders Club twenty-four times.  Scott has also been a qualifier of the Million Dollar Round Table (MDRT), Court of the Table multiple times, and the prestigious Top of the Table.  He has also qualified as a Premier Partner for Lincoln Financial Insurance Company.  In 1993, he completed his Life Underwriter Training Council designation.

Mr. Hunken has been very active in the insurance and financial services industry.  Scott is a past director of the Chicago Association of Life Underwriters.  He served on the Executive Board for the National Association of Insurance and Financial Advisors-Chicago Region, as secretary, treasurer, vice president, president, past president and as the National Committeeman.  Scott is a member of GAMA (General Agents and Managers Association).   He has qualified for GAMA’s highest International Management Award (IMA) fifteen times.  He has also twice qualified for GAMA’s National Management Gold Award.  He has also served on several ad-hoc committees for the Illinois Association of Insurance and Financial Advisors. In 2014, Scott was honored as the recipient of the NAIFA 2014 Leadership in Life Award, an award based on dedicated service.  He also served on Guardian’s home office Brokerage Committee and currently serves on Guardian’s Underwriting and Product Services Committee.

Scott currently lives in the north suburbs with his wife, Noelle and have four children. In his spare time, he enjoys spending time with his family. His hobbies include skiing, boating and playing golf. He is actively involved in his community including sitting as past President on the Board of Directors for The Springboard Foundation, a charity organization that benefits inner-city youth organizations.  Scott is currently a member of the Chicago Commonwealth Club and he also volunteers his time to help out at his children’s public-school fundraising committee. He has published articles in numerous trade journals, including National Underwriter, Advisor Today, Life Association News and the Health Insurance Underwriter.  He has been quoted numerous times in such publications as Crains-Chicago, Bloomberg Wealth Manager, and The Chicago Tribune; Scott has also testified before the State of Illinois Pension Committee.